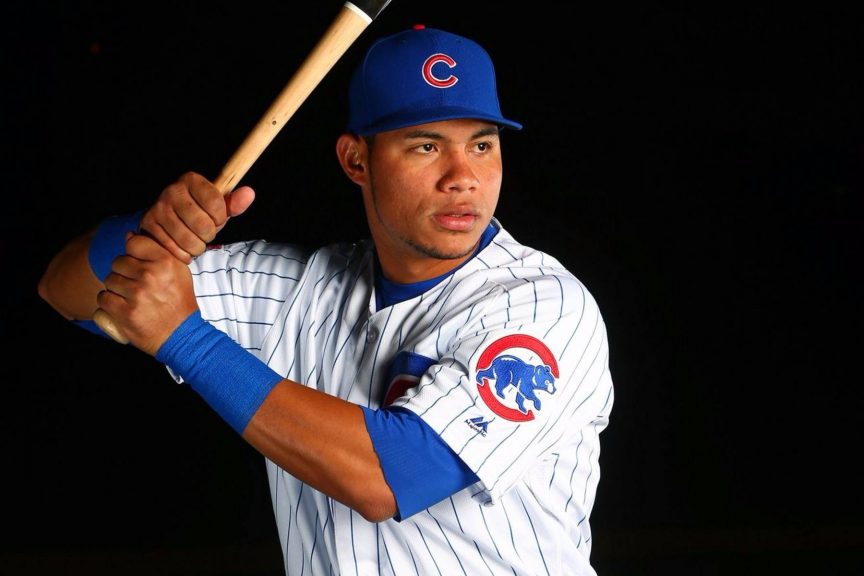 Now that Dusty Baker has won the World Series since most of the world outside of Houston, Texas, refuses to acknowledge the team he managed, trades can be made with impunity and we’re less than a week from full blown free agency (though teams can sign their own outgoing free agents, like the Mets just did with Edwin Diaz). Before we dive into the free agency wish list again (you can read back if you’d like for some of the suggested names to target), here’s something else from Passan that might be intriguing, assuming you can read through the entire thing:

Aside from the usual narrative of a successful campaign and team building and us-versus-the-universe, there was one bit that would be relevant to us Cubs fans:

The Astros and Chicago Cubs were in agreement on a trade to send star catcher Willson Contreras to the Astros for starter Jose Urquidy, four sources familiar with the deal told ESPN. The straight-up trade was agreed upon, pending owner approval. That approval never came.

… And when Click tried to execute the trade for Contreras — a pending free agent who is not regarded as a good defensive catcher but would’ve ably filled the hole at designated hitter that plagued the Astros during the postseason — another prominent name let his opposition be known: Dusty Baker.

“Much as I like Willson Contreras, Urquidy was one of our best pitchers then,” Baker said. “I needed a guy that wasn’t going to complain about not playing every day. And this is his [free agent] year. See, that’s tough. When you trade for a player in his [free agent] year. Everybody’s about numbers and stuff, and I can’t blame them, no doubt. But that’s not what we needed.”

This harkens back to the discourse around the trade deadline that surrounded the narrative that Willson Contreras, despite his energy and his plus throwing arm, was not a good catcher. I will admit that I was happy when Contreras stuck with the Cubs past the trade deadline, and he can yet net the Cubs some compensation via the draft pick from him refusing the qualifying offer and then signing with *shudder* the Cardinals or something, or he can just be paid to be a DH and sometime catcher for a year if he accepts, or the Cubs might decide to throw him some cash and keep him around as a veteran clubhouse guy (would not object). But chances are he is gone, and a lot of it may be due to his devaluation as a primary catcher, considering how much time he spent as a DH this past season and also that narrative.

If the primary issue is pitch framing, then that is just a matter of poor timing since the automated strike zone is not among the rules coming for 2023 despite its effectiveness in minor league play so far. As seen on Baseball Savant’s catching leaderboards, Willson Contreras is dead even on framing runs in his time behind the dish (his brother William is a few runs worse, which was interesting). The two primary catchers during the Astros World Series, former Cubs legend Martin Maldonado and trade acquisition Christian Vázquez, were marginally better, so it’s not just the pitch framing that scuttled the would-be trade (we’ll get into that a bit later).

The thing with Willson is that his teammates love him, but the obstacle is that even with the obvious leadership and clubhouse chemistry, he has to also be good with the pitchers. For the most part, at least in public, the pitchers speak well of how Willson handles himself behind the plate, but I guess there’s more to catching than most of us realize (myself included, I’m not an expert) that he can’t provide as well as others. I think the consensus was that attempting to shoehorn in a catcher (who wasn’t actually that good at catching despite his best efforts) into an existing pitching staff during a pennant race would be disruptive, and that also reduced the chances that Willson would be traded.

When I took a look at the FanGraphs leaderboards (someone will have to help me out here because I don’t think it necessarily differentiates between PAs as a catcher vs other positions), the catcher with the highest wOBA was Willson Contreras when you consider those with at least Willson’s number of plate appearances. The guy I think the Cubs should target if they let Willson go is Omar Narváez, who his a plus framer per Baseball Savant, but hit worse than Yan Gomes this past season. While I think catchers should primarily handle the pitching staff to maintain their health and effectiveness, I would prefer that the spot not be a black hole in the lineup, but I guess you can’t have it all! And it’s not like you can count on Gomes or PJ Higgins to suddenly become offensive dynamos (and in Higgins’ case, to be a better defensive catcher).

As stated above, it really is too bad that the automated strike zone won’t come to MLB until at least 2024, because Willson’s arm and control of the running game could be an incredible weapon without having to worry about the umpire behind him calling pitches correctly. The bat is probably not elite enough to just hide him at first base, and I don’t know how he would be at other positions since those are pretty much spoken for (whether assuming new additions or the existing personnel).

So I think if the Cubs do retain Willson, they have to at least take advantage of what he is good at behind the plate even if he costs a number of strikes. The hope at that point is that the bat will continue to be All-Star level and compensate for the strikes/runs given up. Alternatively, as it seems a lot of teams are willing to do now, they should probably just sign Omar Narváez and do a timeshare with Yan Gomes, which will likely boost the pitching staff overall and make up for the runs that are lost when they come up to bat. For me personally, it does suck to potentially lose a long-time Cub who was loads of fun to watch play, but since I have no choice in the matter, this is the eventuality we have to prepare for. We’ll find out in less than two weeks what Willson does with the qualifying offer, and probably sooner whether the Cubs snag a new catcher (possibly through trade too, since the A’s are purposefully tanking anyway and Sean Murphy could use a new home) while juggling their roster in advance of the tender and Rule 5 protection deadlines.