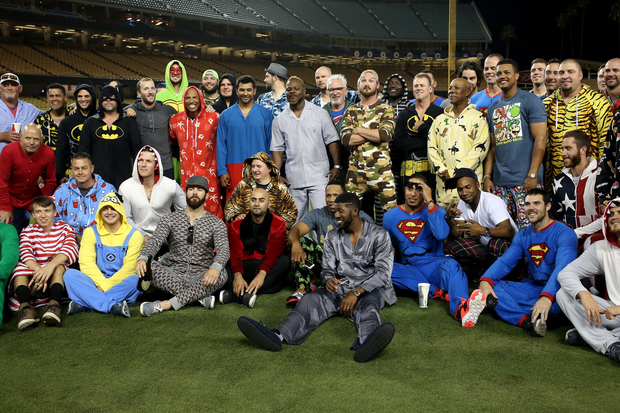 As I sat and watched the second through ninth innings of Game 4 where the end of the Cubs 2015 season had pretty much already been decided after the first inning, I tried to appreciate the small moments we still had left with this team.

I clapped along to Starlin's walk-up music each time he came up, knowing we might never hear it again at Wrigley. Rizzo's "Bad Blood." Schwarber's "No Diggity." I even enjoyed David Ross' "Forever Young" in his at-bats.

They seemed to be doing their best to work the counts and get something good to hit. Even when they failed, the approach was still there more often than not. Right down to the last two batters as Montero worked a walk and Fowler got rung up on another bullshit, off-the-plate strike call that plagued the Cubs all series long, particularly in big situations. If they didn't strike out, they'd often hit the ball hard right at a Met. It was insanely frustrating.

But this was the 2015 Cubs. They hit homeruns. They take lots of pitches. They strike out. They don't play particularly great defense. The starting pitching can be an adventure outside of Arrieta and Lester. The ragtag bullpen of misfit toys was better than most people gave it credit. They were who they were and for this series against the Mets that wasn't good enough.

Sure, the team is young and a high percentage of this core will be back for many years to come. But it will never again be like this.

The 2015 Cubs were a phoenix rising from the ashes of a devastated organization that was rotted to the core until Theo, Jed and the Superfriends arrived in 2011 and started burning it all down to start over.

The organization's entire baseball operations were overhauled and enhanced at tremendous expense. If you haven't seen it yet, please read Brian Costa's excellent piece in the Wall Street Journal detailing how prehistoric the operations were when the Ricketts purchased the Cubs:

The office Tom Ricketts inherited when he took over the Chicago Cubs in 2009 was a windowless room beneath the upper deck of Wrigley Field. A closet just outside his door contained all of the team’s computer servers, which were covered by a cafeteria tray to shield them from the water that would leak through the ceiling when it rained.

The Cubs were still processing season ticket orders by fax machine. They kept up on trade news by employing someone to scan the Internet for articles and deliver printouts to executives’ desks. Some of their staffers were barely on e-mail. And space was so limited that half of them worked in trailers in the parking lot.

The bolded part is mine because HOLY SHIT THEY WERE LITERALLY MAKING SOME KID (probably) PRINT OUT INTERNET ARTICLES THEY FOUND IN ORDER TO STAY UPDATED ON TRANSACTIONS.

THIS IS HOW THEY RAN THEIR MAJOR LEAGUE FRONT OFFICE!

Meanwhile, the culture of the Cubs wasn't exactly one of winning and positivity. You can bring in talent and that will be the biggest step, but if everyone in the organization is waiting for The Curse to kick in, or a #Cubes moment, or a Cubbie Occurrence, or whatever you want to call it, there's a pretty decent chance there's a self-fulfilling prophecy in there somewhere. As much as there is no mystical curse, the psychology of working for a team that is believed to be cursed has to be different than, say, working for a team like the Cardinals or Yankees where they believe God has pre-destined that their team will always triumph. So that was a whole other thing that needed to be changed on an organizational level. Have you ever tried to change a culture of an entire company? It isn't easy and it isn't fast. As Sahadev Sharma wrote for BP Wrigleyville, the Cubs new braintrust managed to change the Cubs' culture in less than 4 years:

When current Cubs first base coach Brandon Hyde was promoted to Director of Player Development towards the end of the 2012 season, the front office plucked the highly respected Tim Cossins from the Miami Marlins to fill the position Hyde left open as the team’s Minor-League Field Coordinator. In the duos first instructional league, Cossins came up with the saying, That’s Cub.

Jason Parks has worked in the Cubs scouting department for a little over 14 months now, but the positivity that’s been built in the organization and being ‘Cub’ was quickly ingrained in him as well.

“That’s so Cub is not a pejorative term,” Parks pointed out. “That so Cub means I’m gonna outwork you. I’m gonna polish my skills to beat your skills, and if our skills are the same, my heart will win out. When I go out to scout a guy, I’m going out to beat the other team, because that’s Cub. When I write my report, I’m going to write a more articulate report, because that’s Cub. When we get guys into the org, we look for guys who have Cub in them. And then the player dev takes that and they turn those guys into Cubs. That’s the way it is from top down in this organization. That’s Cub means something to us.”

This might actually be a more impressive feat than building the proprietary in-house data analysis system they dubbed Ivy. Turning "That's Cub" into something that means positive, winning things? Unpossible. But here we are.

So this was the 2015 Cubs. A Cubs team that was built on a foundation of advanced analysis and improved efficiency in scouting. A team that was built ignoring the colossal history of failure that has burdened the team for my entire lifetime. A team built with the idea that multiple chances at the World Series is better than singular chances. All of that combined with the 97 wins and the playoff eliminations of the two best teams in baseball all while maintaining one of the best minor league systems in baseball make for a wonderfully fantastic season.

But for me there is even more.

Joe started the tone for the year off by offering to buy the press a shot and a beer at his introductory press conference. He provided a basic theme for the season, "Don't ever permit the pressure to exceed the pleasure."

The clubhouse was loose. And when they started to tighten up Joe brought in magicians and petting zoos and had pajama parties. They celebrated every victory down the stretch like they had clinched something. And it made the actual clinching act less of an obstacle. It was just a thing that they do. They show up and they win or they die trying. I can count on one hand the Cubs teams in my life that even came close to that mentality.

And they are babies.

Miguel Montero looks like an ancient old fart on this team. He's only 31.

David Ross looks like he is the grandfather of most of these guys. He's 38.

These guys, as a group, are going to get better. Yeah, Kyle Schwarber looked out of place in the outfield. He's played a total of 77 games there in his professional career. 43 of those games were this season at the major league level.

Yes, they tended to look lost against the Mets' elite pitchers as they threw offspeed pitches and breaking balls from hell to a very generous zone. In case you had stopped paying attention by the 8th inning, Theo noted in his press conference today that Kris Bryant's final HR of the season was off a changeup.

This 2015 team was an unfinished product and they still damn near caught the two best teams in baseball for the division and they actually did eliminate both of them from the playoffs.

And they did it while rubbing their helmets…

#Cubs Herrera wearing a helmet with 2 hands on it. He's the one who started it pic.twitter.com/IcQZy4jXCf

Clapping away to Starlin's walk-up music…

Walking off their opponents a major league leading 13 times… And just generally being adorable the whole damn year.

In honor of @kris_bryant17 being Elsa today for rookie dress up, let's keep this whole Frozen theme going with a little throwback video. He may or may not kill me for this…love you babe????

God, I loved this team.