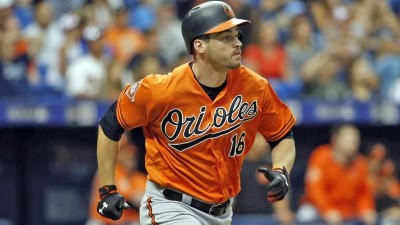 See, I told you it was too early to set a lineup because just a few days after this post, the Cubs did a thing:

The Cubs have agreed to sign Trey Mancini to a two-year contract, according to ESPN’s Jesse Rogers (Twitter link).  Mancini, a client of the Frontline agency, can opt out of the deal following the 2023 season if he amasses at least 350 plate appearances in the first year of the contract, 670 The Score’s Bruce Levine reports (via Twitter).  Also from Levine, Mancini will earn $14MM in guaranteed money over the two years of the deal, and another $7MM is available in bonus clauses related to plate appearances.

The various talking heads suggest it’s straight up $7MM per season for the two years, and if Trey Mancini can get 350 plate appearances over the 2023 season, he can opt out of the contract. This gives the Cubs an obvious platoon partner for Eric Hosmer, allows them to have Matt Mervis work on his defense or whatever, and delay the next roster decision for the moment. This also potentially allows them various other options, including giving Christopher Morel the time at Iowa that he missed when he came up last season. It’s too early in the game to figure out which player they’ll boot off the roster at this time to make room for Mancini, or if they just try to outright one of the many Quad-A position players, but this is what I have as the set of players most likely to break camp with (bold meaning I think that’s a lock):

So that’s eight “locks” and another seven players fighting for the final five spots. Mancini’s presence does allow them a backup corner outfielder, and will reduce the number of plate appearances given to guys with obvious flaws like Patrick Wisdom. I only suggest that Hosmer, Wisdom, and the rest aren’t locks because who knows if someone in the “non-roster invite” pool makes them dispensable, but if I were a betting person (I am not), I’d say the final five are Hosmer, one of McKinstry/Mastrobuoni, Morel, Wisdom, and Madrigal.

This brings us to yet another projected lineup, this time from FOX Sports:

There were some comments during the various Cubs Convention sessions where they considered the possibility of using Nico at leadoff, so that’s the difference from the previous lineups I outlined. There was also some comment about Nick Madrigal of all people playing third base, which (dying laughing)…it’s admirable that he’s trying, though I seem to recall him having trouble even making throws from second base, but that’s what spring training is for I guess.

I think the good part about the FOX lineup is less Wisdom (now there’s a pun), and it appears everyone has reached a consensus about the two-thru-four hitters. It probably makes the most sense to just have Nico lead off, but I think Hosmer is hitting too high, not that anyone after Suzuki’s turn in the lineup makes you feel all that good. Let’s try some adjustments. First, against typical starters:

This alternates handedness from the middle of the lineup on, and the hope is that even though we have some major groundball machines towards the bottom, at least with the shift restrictions, some of those will find holes. Bellinger, Mancini, and Morel have some pop, so a little bit of lift would be nice. Here’s what I think they could do against tough lefties:

I kind of hope the Cubs are able to find a capable center field backup to spell Bellinger every now and then and not just against tough lefties, because I’m unsure you want to rely on Morel or Happ for that, but as with the regular lineup, this one has its own sets of issues towards the bottom with likely copious amounts of ground balls and a goodly amount of swing-and-miss potential. This is, however, the bed the Cubs have made for themselves, and with them now bumping up against the first luxury tax tier, they’re not going to add anything substantial to the offense anymore (not that anyone is left to sign anyway).

Hopefully one day, the Cubs will be able to sign actual long term, elite offensive players and not guys on pillow contracts. For now, this appears to be the best we can hope for.