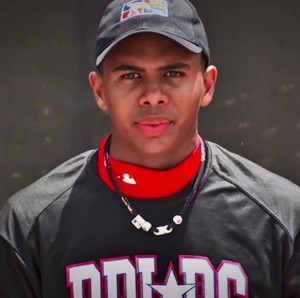 The new international free agent signing period starts Wednesday. The Cubs were unable to stay within their allotted bonus pool limits last year, and won’t be able to spend more than $250,000 on a single player this year, despite having nearly four million dollars to spend. What that adds up to is the that the team is likely to trade some of that money, which can be moved only in the form of slots starting on July 2nd.

For the last few weeks we have heard a few rumors that could be construed as related to the start of the IFA period. The Cubs have been telling teams they expect to deal Jason Hammel early and Jeff Samardzija late. Last year the Cubs received bonus pool space in connection with the Scott Feldman trade on July 2nd. We might see something similar with Hammel, with the pool space heading in the opposite direction. Hammel need not be involved, though. The team could deal a slot for minor league depth independently of its major league talent.

The trend in IFA has been towards locking up players ever-earlier. Some of the players who have agreed to deals with teams in this class did so ten months ago, so most teams know exactly what they need in space, and have likely been negotiating pool space trades for some time. I tried to round up as much information as I could to see which teams are clear trading partners for the Cubs. Obviously, the details of most deals are not yet known, so these are just guesses. On the other hand, big money deals disproportionately eat up pool space, and those are the ones that tend to leak. So, who will the Cubs deal with?

The Yankees are going to spend in the neighborhood of $15 million on prospects. They are more likely to trade space away then to trade for it. The Rangers are in the same boat as the Cubs, albeit with a far lower bonus pool to work with.

The Red Sox and Rays are interesting cases. Both teams seem to have commitments beyond what they could possibly trade pool space for.* Both have bad records this year, however, and are on track to have larger pools next year that they will be unable to use. It’s very uncommon for teams to back out of commitments, though, so don’t expect anything with those two.

*Teams can bring their budget up to 150% of their original allotment via trade.

The rest of these teams either seem to be involved in the market, but with big enough pools that exceeding them is unlikely (Astros, Marlins, White Sox, Twins), or haven’t been connected to any of the bigger names.

These teams have been connected to some big names, but their projected signing bonuses seem comfortably within their budgets (a million or so of projected excess space).

Here’s where we get to some interesting cases. The Brewers have reportedly agreed with Gilbert Lara for approximately $3.2 million. Their budget is around $2.6 million and max penalties in the absence of a trade start at $3.0 million. I suppose it’s possible that they are interested in a deal for Hammel + pool space. There’s not much depth in their system beyond Jimmy Nelson, though, and adding $600k+ in space will likely require something substantial in return.

The Rockies have been connected to Pedro Gonzalez, Antonio Arias, Yeremy Rosario, and Javier Guevara, which looks like it would put them right in the neighborhood of their $3.48 million max-penalty limit.

The Padres are a mystery. They are connected to a handful of big names that would put them right around the $3.77 million that they could possibly trade up to. Usually that’s the mark of a team that’s going over no matter what, and is not interested in acquiring space. On the other hand, they just fired their GM. If any team is going to back out on some agreements and/or make some trades to preserve flexibility for the next guy, it’s the Pads.

The Phillies, Blue Jays, and Royals seem to be within about a half million of their original budgets. They are probably under budget, but my confidence level in the reported information isn’t that high. Any of them could well be planning to trade for some space and go over. Also, the Blue Jays have been connected to the Cubs in trade talks for the last decade or so, so it seems mandatory that they be mentioned in this space.

The Dodgers haven’t really been connected to anyone. I just think it’s silly to rule them out when discretionary spending is at issue.