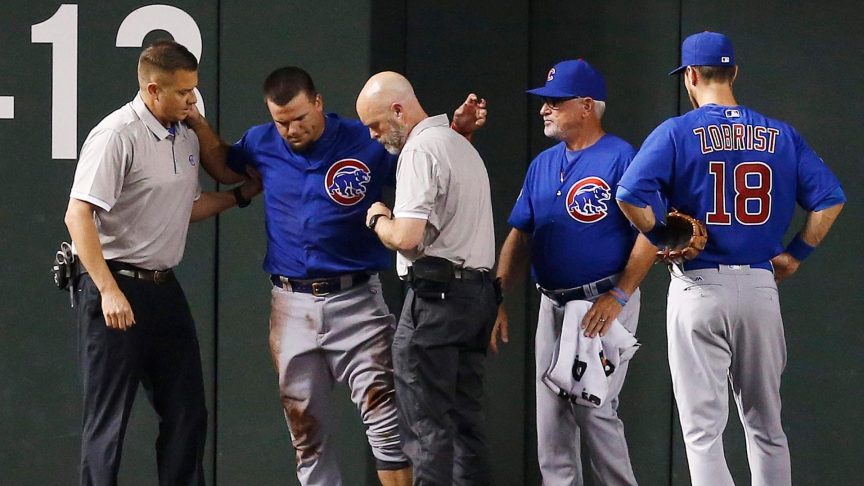 The answer to that is surprisingly simple and obvious to anyone who has watched much of this team. The Cubs lost Kyle Schwarber for the season during a play in Arizona in the first week of the season. Schwarber was expected to be one of the primary offensive contributors to this team. Any time you lose a player like that, it hurts, but the Cubs were specifically built to deal with such an injury. In fact, it was at that position (left field) that the Cubs could best deal with it.

They had Jorge Soler who was a starter last year and was then planned to be used as a 4th outfielder. Javier Baez was rehabbing a minor injury and was due back soon. At that point we figured it would come down to which of those two was the hottest. The answer: Javier Baez. Not only is Baez performing signficantly better at the plate, the defensive improvement with him on the field compared to Soler is remarkable. Baez is one big reason why the Cubs have the best defense in baseball to this point in the season.

Along with Schwarber’s loss, the Cubs just put Matt Szczur on the DL and previously put starting catcher Miguel Montero on the DL. They’re also dealing with a nagging injury to Jason Heyward‘s wrist, which he suffered in Arizona (same series that saw the loss of Schwarber). He didn’t tell anyone about it for weeks. Note to players: always tell the club about a possible injury.

Even Kris Bryant missed some action with a sprained ankle. If there’s anything that has gone wrong, the most obvious is that they’ve suffered their fair share and more of injuries.

Now that Szczur is on the DL, the Cubs have called up Ryan Kalish. I don’t think any Cubs fan imagined a situation in which Kalish being on the roster in early May could have been anything other than really bad news. It hasn’t been to this point.

Not so surprisingly, finding other things that haven’t gone right proves difficult. Jorge Soler was thought to be one part of the answer to Schwarber’s injury, but he’s been terrible so far this season.

He’s hitting .185/.276/.292 with a .258 wOBA. His wRC+ is 54. Among outfielders with 70 plate appearances or more, only four of them have a worse wRC+ than Soler: Peter Bourjos (13), Michael Taylor (34), Eddie Rosario (36) and Desmond Jennings (43). No outfielder has a lower fWAR. It’s a good thing the Cubs had so much depth because Jorge Soler is one way the loss of Kyle Schwarber could have really stood out and hurt this team more than we expected.

On the pitching side of things, Clayton Richard has thrown only 2.2 innings this year. I hate 13-man pitching staffs, but it becomes an obviously stupid thing when one of those pitchers has only thrown 2.2 innings and has been with the team the entire season. It’s time for the Cubs to seriously re-think the 13-man pitching staff. It’s gotten to the point where the Cubs are using Clayton Richard as a pinch hitter to get him playing time. That is not good.

After this, you’ve really got to stretch to find anything that has gone wrong.