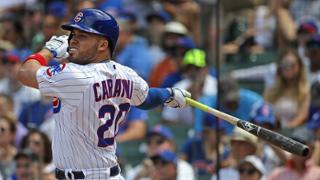 In 2014, Willson Contreras was starting his 6th season in the Cubs minor league system. He was starting A+ ball for the first time ever. The previous year, in A ball, he hit .248/.320/.423, for a wRC+ of 97. He wasn't a horrible prospect, but he profiled as perhaps a backup catcher at the major league level, and one who might never get through the filter of AA. In 2015, his seventh (!) year of minor league ball, he hit .333/.413/.478, exploded onto the prospect scene, and hit even better the next year en route to a midseason callup. Now, Contreras is either the 2nd or 3rd most valuable position player in the Cubs' franchise, and there's a decent chance that he gets a 9-figure contract at some point in his career.

Who saw it coming? In 2013, Contreras (as a 20 year old, in fairness) had a .174 ISO, his highest pre-2015 mark in his career. He'd never walked in 10% of his plate appearances in a season he had more than 100 PA. It's hard to come up with players that are decidedly average for 6 YEARS and then explode for an insane, career-making line. In 2014, John Sickels DIDN'T LIST WILLSON CONTRERAS among his prospects (of which he named 37). Didn't have room for Contreras, while Mike Olt, Shawon Dunston Jr, and Josh Vitters still had some run left in them. In 2015, he wasn't on the list. In 2016, he was 4th.

Like Contreras, Victor Caratini has toiled in some anonymity in the Cubs system for awhile. Like Contreras, Caratini is a mostly catcher (Contreras played a little 1B and some thought he'd have to move there eventually, and Caratini may be a corner outfielder when it's all said and done). Caratini had some better years than Contreras in his first taste of the minors, but he was also much older. In Caratini's first 4 years, his high ISO was .140 (Braves rookie ball), and he was 19 in rookie ball (which is older than it looks). Caratini laid down a line of .342/.393/.558 in AAA last year, which led to him getting a late call-up (where he acquitted himself just fine: .254/.333/.356). Caratini was 15th in the Cubs 2015 Sickels list:

He went to 10th before last season, and now Sickels has him 5th (and said he could have been 1st!)

5) Victor Caratini, C-1B, Grade B: Age 24, second round pick by Braves in 2013 from Miami Dade JC, traded to Cubs in 2014, hit .342/.393/.558 with 10 homers, 27 walks, 48 strikeouts in 292 at-bats in Triple-A, then .254/.333/.356 in 59 at-bats in the majors; switch-hitter with impressive feel for hitting, raw power not rated as special but had big production boost in ’16 with career-highs in most categories; has a good eye and walk totals should increase in time; defensive tools aren’t naturally outstanding but he’s developed into a steady and reliable receiver through hard work, also playable at first base; fits profile of player who has offensive surge in his late 20s. ETA 2018.

Among the "heavy lies the crown" problems that the Cubs have now is that there is just no spot for the Cubs to naturally include Caratini in 2018. He'll spend the season mostly in AAA, just like Jeimer Candelario did in 2017, and it'll be hard if not impossible for the Cubs to see what they have with him without an injury to either Anthony Rizzo or Willson Contreras. The 2014 Cubs are giving Victor Caritini 500 plate appearances because you just aren't that concerned about getting Beef Castle 500 PA.

If the Cubs have to go out and acquire somebody at the 2018 trade deadline, it's almost certainly going to be with pieces like Victor Caratini (who the Cubs stole from the Braves for Emilio Bonifacio, James Russell, and cash). A Victor Caratini for Pat Neshek trade basically writes itself.

It's awesome when the Cubs (or any team, really) stumbles upon a late bloomer. Caratini has been pretty much an org guy for his entire career, until his age-24 season. There, at catcher, he exploded offensively, and demanded the Cubs take notice. That's fairly interesting.