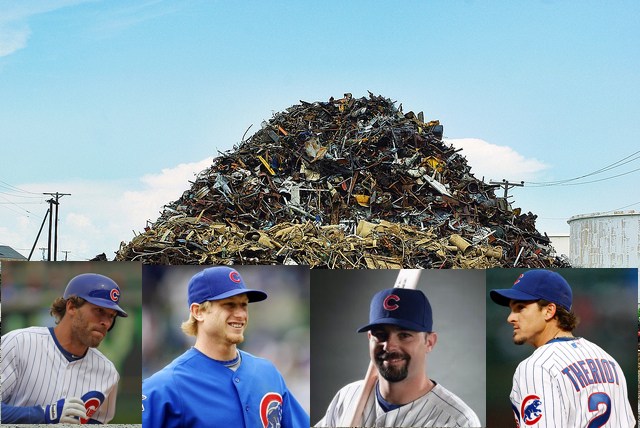 It was an ice cold stove for most of the offseason, but things finally picked up after Shohei Ohtani signed with the Los Angeles Angels of Disneyland on the eve of the Winter Meetings.

The Cubs picked up a pair of relief pitchers and a injury project that could see some time in the pen late this year:

This was mostly covered in last week's post, but the Cubs signed Morrow to a 2/18 deal, with a $12m club/vesting option for a third year or $3m buyout. Morrow was a solid starter for the Blue Jays before injury prone-ness cut his starting career short. I thought he had started for the Brewers at some point but must be confusing him with someone else. He had shoulder surgery in 2015 that  finally put an end to his starting career, and he was lights out in his first full season as a reliever with LADoLA, posting a 2.06 ERA and 1.55 FIP. There's a bit of injury concern as he threw 60 innings last year in his first full season back from the surgery, but I think this is a pretty great deal for the Cubs. I get the vibe that they don't intend for him to close, which could indicate that they aren't done with bullpen shopping.

The Cubs also signed former Marlins closer Steve Cishek to a 2/13 deal. Cishek is a sidearmer who is a ground ball machine (career 49.8%) but also gets a decent amount of strikeouts (career 9.58 K/9). He's struggled with walks in one or two seasons but holds a career mark of 3.29 BB/9. He's also been remarkably consistent, posting a sub-3.00 ERA in five of his seven full seasons, and even his worst season was merely a 3.58. The Cubs would have loved that in the back half of last year.

This one is more of a project, as Smyly is coming back from TJS. He's always been a projection system favorite, and I would have guessed he was a Joe Maddon favorite too but their time with the Rays only overlapped for seven starts at the end of the 2014 season. He main claim to fame metrics wise is that he has one of the most over the top deliveries in the league, which changes how his fastball plays. It's also a big reason he was such an injury risk and probably why he ended up on the surgeon's table. He might be back as a RP later this season, and I'm sure the Cubs would love to have him in the rotation next year.