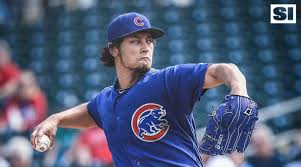 This season, the Cubs’ biggest free agent signing is probably Daniel Descalso. That isn’t what people expected from this front office, which has been a major player in every off-season that followed a competitive season. While it’s perhaps not realistic to expect a 9-figure free agent every off-season, the fact of the matter is that is what Cubs fans have become accustomed to. They have ranged from the brilliant (Jon Lester) to the terrible (Jason Heyward), but they’ve actually occurred…until this season.

Last year’s big FA purchase was Yu Darvish. He signed a 6 year, $126M deal last offseason and basically didn’t pitch for the Cubs last year. His season amounted to 40 innings of replacement-level baseball (in reality, he was a touch better, but it was close enough for our purposes). Last year’s second big FA purchase was Tyler Chatwood. He signed a too many year, $too much money deal last offseason and basically didn’t succeed for the Cubs last year. In fact, if you add Darvish and Chatwood together, you get the following monstrosity:

For all intents and purposes, the Cubs did not make a FA signing last year. They set $37.5M on fire and received such little production for it that they had to get Cole Hamels at the deadline just to have a warm body in the rotation (and he turned out to be a revelation). This season, Chatwood won’t be anywhere near the rotation and Darvish is presumably healthy (if “best shape of his life” stories are to be believed). In a way, you can pretend that Yu Darvish was signed to a 5-year, $101M dollar deal this offseason.

This isn’t entirely genuine. Not only are there dozens of examples of pitchers getting injured and never recovering, it isn’t even the first time Darvish has missed most or all of a season with a calamitous injury. This season was perhaps the worst way to miss a bunch of time – Darvish, as you know, tried to rehab the injury, altered his throwing motion to eliminate pain, made it to rehab starts, and re-injured himself when he tried to get to in-game deliveries. One also should note that the projection systems all peg Darvish to put up the worst season of his entire career (2.6 fWAR, or thereabouts). Darvish simply isn’t likely to be the player the Cubs thought they were getting when they signed him.

On the positive side, Darvish has comparatively fewer miles on his arm than the other pitchers in his cohort. He has 3,624 batters faced in the last 6 seasons. On average, about 85 players a year face more batters each season than he has. His “arm” is relatively young for a 32-year old. I’m too lazy to pull up a study (if one even exists), but if you believe that “arm age” is a thing, which does seem intuitively correct, that’s a point in Darvish’s favor. Another is that Darvish has so many different pitches that he at least has fall-back options should something not be working. If Hendricks’ changeup suddenly deteriorated, he’s out of baseball. If Darvish’s slider suddenly deteriorated, he could at least get outs with another offering while he works through his issues. Darvish might be more likely to “reinvent” himself if a reinvention is necessary.

It really does suck that the NL Central is simulataneously very competitive and yet there for the taking, with free agents in their prime years at positions of need for this team available for just money. It seems horrible that the Cubs are seemingly not in play for either Machado or Harper. Hopefully, the return of a full-strength Darvish (and a full-strength Bryant) can act as a de facto FA signing and provide the Cubs with the necessary firepower to win the division. Lest we forget, the Cubs’ big free-agent loss this year was rent-a-swingman Jesse Chavez on the pitching side and rent-a-homophobe Daniel Murphy on the hitting side. The core of a 95-win team is still intact. The cavalry isn’t coming with a real $100M+ signing. A fake one will have to do.