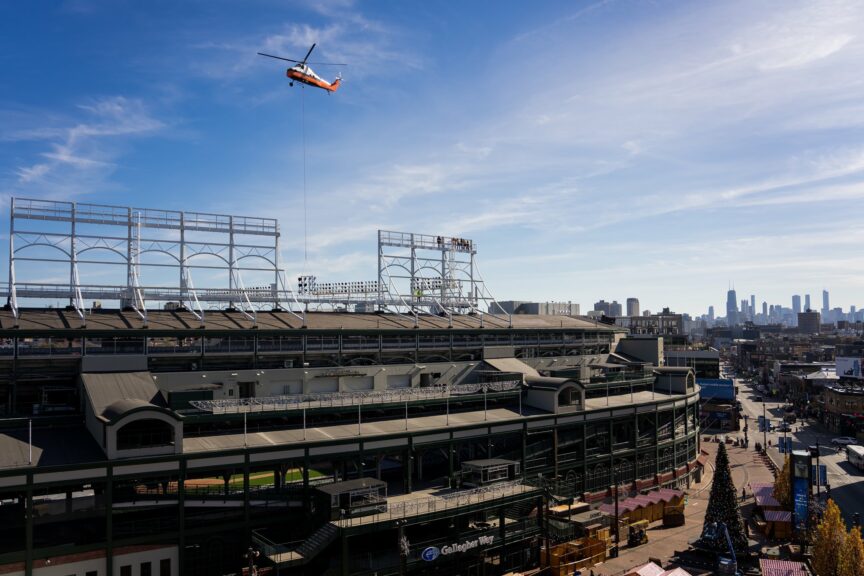 I’ve been on a sustainability kick, what with driving my gasoline-powered car way less (we’ll probably sell it at some point) and switching over to my electric car. It’s been disappointing to realize that maybe only 10% of the stuff I throw in the blue bin actually gets recycled, and if only a few billionaires pooled their resources to set up a better recycling workflow, this might reduce the amount of plastic whales get in their diet, but I digress (only for a moment).

The impetus for this shart of a post is the Cubs installing LED lights for night games:

I can see plenty of benefit here, wherein the Cubs will draw less energy from the grid, directly saving money that can (theoretically) be used to pay better players, and the indirect effects with using less energy is less coal or whatever being burned and spewed into the air as pollution and more carbon dioxide to fry us alive. I think they can certainly do more, what with the mountains of plastic cups used to set up cup snakes in the bleachers and all the various wrappers and cardboard containers. I’ve even seen people leave their $15 (probably more now) nacho helmets behind, so there’s more plastic waste for ya. And while there are plenty of bins around the ballpark to deposit refuse and recyclables, since a lot of people don’t care, they all get mixed up anyway, and if the custodial staff when I was in Chicago in both labs and classrooms were any indication, they’re all going in the landfill anyway. It’s really rather disappointing and alarming given everything science has told us about global climate change.

Another motivation for this side toot is a retweet from David about France wanting more solar power or whatever:

Solar power is an excellent idea, but as we well know, unless you’re on the space station and have no choice, there are many more efficient ways to generate electricity that do not involve fossil fuels. Solar is good because the sun isn’t expected to burn out for another few billion years, and it would be nice if humans could figure out how to harness it as efficiently as plants and other photosynthetic organisms do. I think switching to solar would be great if it wasn’t so damned expensive to set up in the first place, which is yet another problem of accessibility. More people would switch to electric cars and solar if it weren’t some glorified status symbol like when South Park made fun of people with hybrids. I have my own private beef with Tesla, but I’d bet they would be more adopted outside of rich bastardville if they didn’t cost $60K+. I suppose it would look super weird if the Cubs installed solar panels on the roof of the grandstand, but that might at least be more practical than a giant windmill above the Harry Caray statue (did they move him too? I forget).

One of the more annoying parts of going to the ballpark if you’re environmentally conscious is all the trash left over, not to mention the mixing of landfill waste with organics and recyclables. Even when I visited Oracle Park in San Francisco, where they’re big on responsible sanitation or whatever (San Francisco has their own set of social problems that we won’t get into but you probably know anyway), often you will see food waste in with the recycling and plastic cups in landfill containers. There just isn’t enough desire or personnel to make sure everyone does their part to keep waste properly separated. So no matter how much the ballpark (Wrigley or Oracle or otherwise) claims to be green, even if some of it is greenwashing, the impact is diluted by the apathy of the masses.

I’d like to think that in the future, it will be economically viable for everyone to truly pitch in. The apathy can hopefully be tempered with better education. We’ve got a long way to go.