Somehow the White Sox are hovering around .500 despite the vortex of suck that is their offense. As @rotopat pointed out on Twitter yesterday, Dodgers pitcher Clayton Kershaw has more hits against LHP than Adam Dunn does this year. Since everyone cares so much about the Crosstown Cup, the Cubs either need to sweep or win two out of three (winning the last game) to win. Maybe the teams should make it more interesting by making the loser have chemical dispersant sprayed all over their fans.

As always, team stats (and league rankings) are presented

Paul Konerko (.412) and Carlos Quentin (.385) have basically carried the lousy Sox offense. They have three players who have double digit negative wRAA in Juan Pierre, Brent Morel, and Alex Rios, and given how he’s struggled this year I’m surprised Adam Dunn isn’t also on this list. The Sox starting pitching has been the strength of their team, and they were foolish enough to go to a six-man rotation before an injury to Danks brought things back to normal. I said it last time, but I’ll be shocked if one of those pitchers isn’t traded for a bat before long.

The Cubs have improved their pitching numbers since the last time these two teams faced off. The bullpen has shaved off a tenth of a point of FIP to improve their ranking, but the improvement of the starters’ ranking is largely a product of the rest of the league pitching lousier.

The big factor in the drop of Jackson’s DIPS numbers is his HR rate, which sits at 0.58 HR/9. He’s also cut down on his walks a little bit, but I’m surprised to see how low his xFIP also looks. He’s had some lousy BABIP luck this year (.347) at first glance, but it can be explained by his 25% LD rate. In fact, it could probably be even higher than that.

Things still aren’t looking great with Wells. He only walked two in his last start, and has been able to go six innings in his last three, but something is still up. I have no idea how he managed to get through six innings vs the Royals and give up TEN line drives. He hasn’t struck out more than three batters in a game since striking out seven in his return to the DL. Maybe it’s MRI time again, or just time to shut him down for a while. Something ain’t right.

Speaking of guys outpitching their projections, holy crap Phil Humber. He’s had a lot of luck this year (.219 BABIP as a GB pitcher, 5.9% HR/FB) but he’s doing a great job of keeping the ball on the ground and not issuing free passes. He hasn’t pitched less than six innings in a start since April 20th, and has gone seven or more in nine of his fourteen starts. Not bad for a guy who was basically just keeping Peavy’s seat warm.

It’s probably just that I missed the game, but it feels like forever since the last time Garza pitched. His early season numbers are coming back down to earth, and while he still averages more than a strikeout per inning, he hasn’t actually accomplished that feat in his last six starts. He’s kept up his career-defying groundball numbers and I’m still scratching my head: 50.4% GB rate despite a sub-40% rate over the rest of his career.

Floyd has seen a drop in his strikeouts but otherwise has been the above average pitcher that he always has been. Much like Humber, he’s gone deep in a lot of games which is more than the Cubs staff can generally say.

The less said about Rodrigo Lopez, the better.

Cubs lose two out of three yet again. It’s too bad bridges were burned with Barrett left the Cubs org, because he should be the seventh inning stretch singer for every game this series. 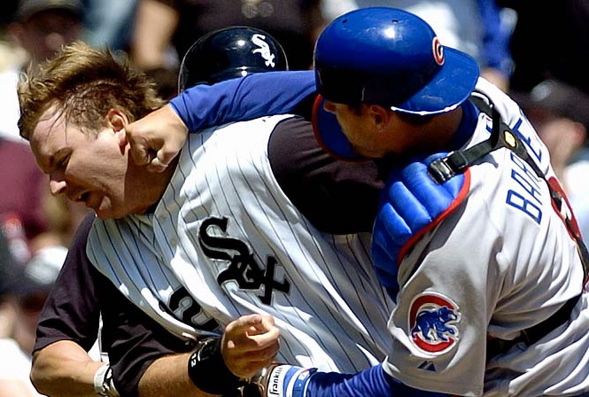