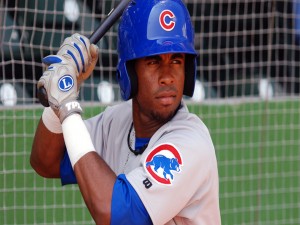 Of all the strange consequences for prospects under the current CBA, perhaps the strangest is this: the less potential a prospect has, the quicker he is likely to make the majors. If your goal as a prospect is to get to the “Bigs” as soon as possible, the sweet spot is being good enough to contribute at the major league level, but with low enough upside that you probably won’t be a significant piece for a good team. No one pays attention to Justin Grimm‘s arbitration clock. The Rays weren’t furiously checking their Super Two Calendar when considering the promotion of Kevin Kiermaier or Brandon Guyer. Prospects like Desmond Jennings, George Springer, and Kris Bryant, though, can pretty safely pencil in two dates for possible big league promotion: “Extra Year of Club Control Day” in April, and “Super Two Day” in June.

The Platonic Form of “good enough, but no real potential” might be Chris Owings of the Diamondbacks. Owings made the odd top 100 list before the 2013 season, but wasn’t anyone’s idea of a consensus top prospect. He performed reasonably well in the hitter’s paradise that is AAA Reno that year, was called up in September, and broke camp with the team this April. Such a quaint, 1990s-like timetable.

Alcantara is a notch above the Owings Zone, and will likely have only two days with the Cubs while Darwin Barney is on paternity leave. Tough luck, kid. You just need to work off a little bit of that extra upside in Iowa. On the bright side, both of Alcantara’s games will be on WGN. Hopefully he starts.

Race to the Top

The Cubs managed to drop both halves of a double-header against the Reds yesterday. Meanwhile, the Astros, Rockies, and Phillies all won, moving the Cubs to within a game and a half of the worst record in baseball. The Diamondbacks did manage to snatch defeat from the jaws of victory thanks to an Addison Reed blown save, mitigating what could have been a banner day for the Cubs in the race to the top. #1 draft pick fever: it’s spreading!

Who would ever have imagined this three years ago? Manny was then considered so aloof and self-centered that his name was synonymous with obliviousness. Now multiple people are floating the idea that he’s an effective hitting coach and a good influence on prospects with a straight face. I am fully bracing myself for the inevitable hiring of Ozzie Guillen by the Marlins as a Social Media Consultant.

So far, the Cubs’ supposed discovery of a market inefficiency in the value of 2014 pool slot value hasn’t panned out. The Brewers, one of a few teams pursuing space this year, traded Rodolfo Fernandez to the Athletics for $339,000 in space. They still need at least another $150,000 to sign Gilbert Lara, so don’t be surprised if the Cubs end up stepping in. Meanwhile, the Rays acquired almost $1 million in space from the Marlins for pitcher Matt Ramsey. The Rays are going into the max penalty regardless, but are poor enough that they can really use the dollars saved in tax money.

Fernandez and Ramsey make Ronald Torreyes look like an elite prospect. If that’s where the market is at, it’s no surprise that the Cubs haven’t made any moves.

That’s a pretty steep price to pay for a high schooler about to undergo Tommy John surgery, but hopefully he turns into something special down the road. The amount of money that Cease required pretty much closes the book on the hopes that the team would be able to land one of the late-round top 200 players that it drafted. Isaiah Gilliam, Michael Cantu, and Riley Adams were always longshots, though, so no big loss.