Tony Gwynn was probably the best pure hitter I’ve ever seen play in my life. I also saw Pete Rose and Wade Boggs play, but those are the only two I would consider an argument about and I believe Gwynn was better.

He was always one of my favorite players even though he was a member of the 1984 Padres team that beat the Cubs. He was too good and seemed like too good of a guy to have any lasting resentment.

This morning, reports of his death spread over Twitter so fast and so out-of-the-blue that I checked a few places to try to see if this was just some vicious hoax. It didn’t take long to see credible sources popping up all over with the same terrible news. Tony Gwynn had died of cancer. And I was left in shock.

Part of it is that I don’t feel old enough to expect baseball players of my teenage years to be dying off. But part of it is he was one of the few baseball icons I ever had the opportunity to interact with in even any small way.

Back on April 30, 1999, I took a day off work and headed down to Wrigley to catch a Friday afternoon game between the Cubs and Padres. It was a beautiful sunny day so I got down there when the park opened and went to watch batting practice. I headed down to the wall by the visitors bullpen and I took in all the warm-ups and observed all the other folks who were trying to get Padre autographs.

Now, the Padres were pretty bad at that time. Phil Nevin was batting clean-up and something called a Quilvio Veras was leading off. Reggie Sanders was on the team but he must have been going through one of his billion or so injuries because he didn’t play the day I was there. Amid all the flotsam and jetsam in the lineup was Tony Gwynn batting .412 at the time as he chased his 3,000th career hit. That was the Padres. Tony Gwynn and if they had a lead late, Trevor Hoffman. That was about it.

So you would think that the Padres would be a fun group of guys without giant egos.  Nope. They were dicks. They ignored every fan request for a ball or an autograph. When a stray ball came near the wall they’d pretend to throw it to a kid and then laugh and head back out onto the field. I’m not an autograph guy and I don’t understand adults who are, but these were mostly kids and these no names were acting like they were baseball royalty.

Then Tony Gwynn came over. Immediately the crowd couldn’t give two fucks about Phil Nevin and everyone wanted Tony to sign something. He wandered over and started signing. And signing. And chatting with people as he went. And still more signing. He smiled the whole time.

As he drew nearer to where I was, I didn’t have anything for him to sign, but I figured I had to at least SAY something to him. As a fairly introverted person, I knew my odds of ever having more opportunities to say anything to a sure-fire Hall of Fame baseball player were pretty small. So as he signed some kid’s hat near me, I said, “Hey Tony, could you do me a favor and not get your 3,000th hit against the Cubs this series?”

He just about fell over laughing and said, “Well, I’ll try to take it easy on them.”

Then he went back to signing and chatting with the growing crowd as people realized he was there. He didn’t stop until the on-field warm-up was over and all the Padres were jogging off the field.

But what I’ll remember is that day when he genuinely seemed to enjoy interacting with the fans when he had every reason to act above it, like his far less talented teammates. And I’ll remember that I made him laugh. 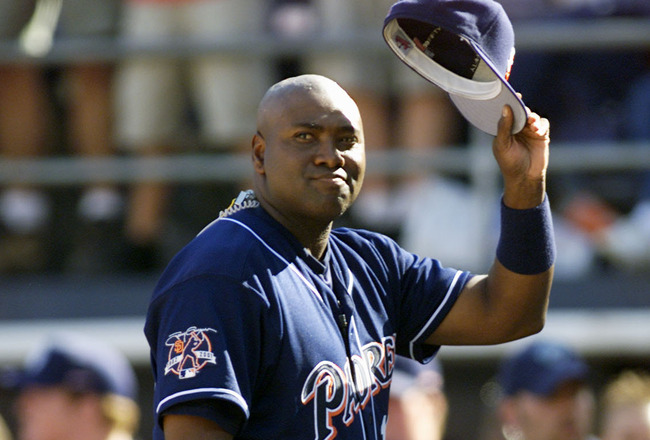