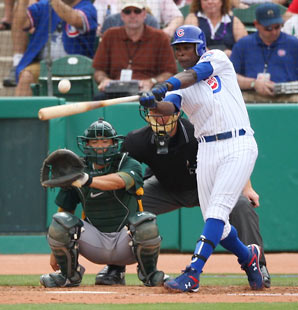 Since Carlos Zambrano was traded two days ago I think all Cubs fans have wondered what it might mean for Alfonso Soriano. The Cubs were willing to eat almost all of Zambrano’s contract in trading him. We know that Tom Ricketts has given Theo the go ahead and clean house even if it it requires the team to send truckloads of money in doing so. Immediately after hearing of the trade I couldn’t help but think that Soriano’s days are numbered. Then again, I’ve been thinking that for awhile now so that’s nothing new. But then I re-read Theo’s comments about the Z trade and I think he tells us what we want to know.

“With respect to subsidizing some of Carlos’ contract, I think the concept of a sunk cost was something Tom (Ricketts) and I discussed at our very initial meeting,” Epstein said. “Tom showed a keen understanding of what that means. For better or worse, if you’re stuck paying $18 million for one year of Carlos Zambrano, and there is not a team willing to take him with any dollar relief whatsoever, then you have to decide were we better off with one year of Carlos at the $18 million paid, or are we better off paying the $18 million and getting a 25-year-old pitcher with three control years?” — Tribune

Let’s take Theo’s comments and change it a bit.

For better or worse, if you’re stuck paying $54 million for three years of Alfonso Soriano, and there is not a team willing to take him with any dollar relief whatsoever, then you have to decide were we better off with three years of Alfonso at $18 million per year paid, or are we better off paying the $18 million per year and getting talent in return?

I think we’d agree that the answer to that question is yes, the team would be better off getting talent in return. Whether or not any team is willing to take Soriano and give up anything is another question and not one I can answer. I don’t know if the Cubs trade Theo, but it seems clear to me that they’d be happy to do so if they can get anything of value in return. It also seems clear they aren’t just going to release him.

Theo also added a bit more about Soriano specifically since I started writing this.

“He also hit 26 home runs and drove in 88 runs last year,” Epstein said. “He’s a valuable offensive player, so it’s our responsibility as an organization to work with him and to get the best out of him.

“At some point in the future, if there’s a transaction that makes sense with any of our players that puts the Cubs in a better position moving forward, we are going to pursue it. But in respect to Alfonso, he has power and is an offensive contributor. We can work with him to get the best out of him and see where that takes us.”

I’d be surprised if the Cubs get any offer for Soriano. I’m even surprised some teams are apparently talking to the Cubs about him, but I’m guessing it’s more like if you want to release him we’ll take him and send you a box of donuts. So Soriano is likely staying put for the time being.

Perhaps that’s why we’ve heard rumors about the Cubs being interested in trading Marlon Byrd.

A good source tells me that the Cubs and Red Sox have indeed been discussing Marlon Byrd, who is under contract for 2012 at $6.5 million. The Cubs appear to be looking to save salary in the deal while picking up a lower-level, high upside type prospect. Byrd and the Red Sox have been connected for a couple weeks now.

I’m actually surprised the Cubs care much about salary relief at this point. Byrd is worth more than the $6.5 million he’ll be paid so he has surplus value even if the Cubs send no money in the deal, but with the new CBA it makes all the sense in the world to take the one advantage they have and send all the money he’s owed and get the best possible prospect in return. At least that’s what I hope they’re thinking. They should be thinking that.

Something Buster Olney said today has made the rounds and raised a few eyebrows.

No. 2: Many talent evaluators view Garza as a middle-of-the-rotation starter, rather than a No. 1 or No. 2. It might behoove the Cubs to keep Garza in the hope that he pitches well, so they can better market him in the weeks leading up to the July 31 trade deadline.

That just doesn’t seem right. Or is it? Fangraphs has become everyone’s favorite site for stats and it’s a great site. He ranked 13th in fWAR among starting pitchers last year. He ranked 8th in FIP, 11th in xFIP and 15th in SIERA. However, he was worth only 1.6 fWAR the year before. fWAR focuses only on defense independent pitching stats. It’s not an accurate measure of what actually happened.

rWAR looks at runs scored and includes things that fWAR does not. Garza’s 2.9 rWAR ranked 55th among pitchers last year. He was worth 2 rWAR the year before and a total of 7 the two years prior to that.

Garza did make some changes and there’s reason to be optimsitic he can come closer to repeating his 2011 season than we could otherwise expect, but he will regress toward the mean. We can’t ignore the previous years and focus only on his best season.

That being said, I’m not really sure what kind of talent evaluator would say Garza is a middle of the rotation starter unless 2, 3 and 4 are considered middle of the rotation. I would consider Garza more of a number 2. As good as his fWAR last year was, his rWAR is much more in line with his career whereas the fWAR jumped considerably. CAIRO projects a 3.66 FIP and 2.0 WAR. Oliver projects 3.9 WAR and the Fans project 4.0. Bill James projects about 3 WAR. In 2008 and 2009 we heard repeatedly about how Carlos Zambrano was not an ace. Well, he was a 3 WAR pitcher. That’s about what we expect from Garza next year. I’d take the over on it if I was betting. I’d probably guess about 3.6 to 3.8 WAR.

You’ve probably already read the report on CBS Chicago or heard about it, but Starlin Castro has been accused of rape. The only reason I bring this up is that a few months ago Mish left a comment about a friend of his suggesting there was an investigation into rape charges against Castro. I didn’t pay attention at the time, but it appears to be true. There’s way too much information that we don’t yet have so I’m hesitant to say too much about it right now.