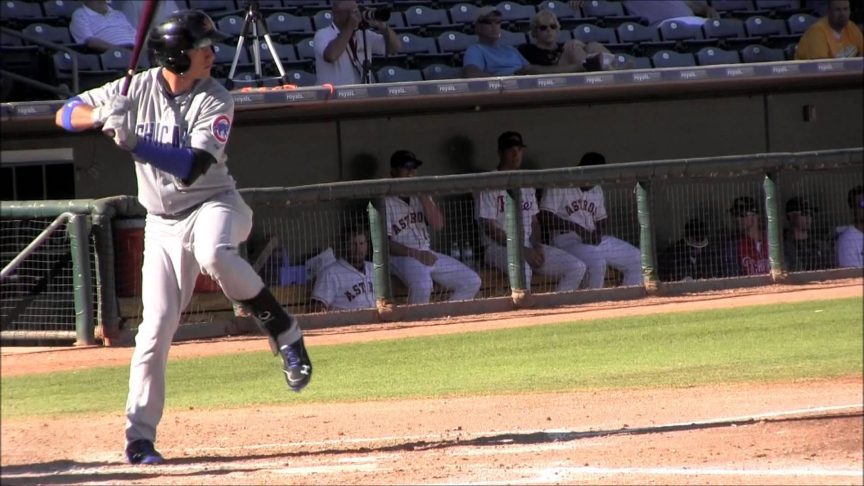 It won't be surprising, but Jorge Soler could head to the DL with a left hamstring injury before today's game. Word is that Albert Almora is on his way to Philadelphia to replace him on the roster if that move to the DL is needed.

Cubs No. 5 prospect Albert Almora is on his way to join the team in Philadelphia on Tuesday, and he will likely be activated if left fielder Jorge Soler goes on the disabled list, according to a baseball source.

The Cubs have not commented on the potential move, which was first reported by MLB Network's Jon Heyman.

Almora was the first draft pick selected by the new front office of Theo Epstein, Jed Hoyer and Jason McLeod. Huge expectations have followed him throughout the system, but those expectations have thankfully been spread around to many players. Cubs fans weren't able to pin their team's future hopes on just one or two guys as in the past. The Cubs had a ton of prospects,  many of which we saw with the Cubs last year and this year. Almora's addition would just be another one of those top prospects joining the already young Cubs roster.

Almora hasn't put up the impressive offensive numbers that some of the other prospects did. His numbers are no match for Kris Bryant, Kyle Schwarber or Jorge Soler. You'd think they'd be more comparable to what Addison Russell was doing, but they're not. Addison Russell was the far superior offensive performer in the minor leagues.

The scouting reports have always suggested he's among the best outfield defenders in baseball though. He'll have one of the game's best in Jason Heyward to work with in Chicago if he sticks around.

Baseball America did not have Almora ranked in their top 100 prospects for the first time entering this season. He was the 6th ranked prospect in the Cubs organization. From Baseball America:

Almora played for six USA Baseball amateur teams from 2007-11 before the Cubs drafted him sixth overall in 2012, passing on the likes of Michael Wacha and Marcus Stroman while signing Almora for $3.9 million. He interrupted his season at Double-A Tennessee with another stint for Team USA, this time in the Pan American Games in Toronto, where he helped the Americans win a silver medal. In terms of tools, Almora is who he is–a contact-oriented hitter with strong forearms and wrists who has a knack for making contact and avoiding strikeouts. He has improved his selectivity but still doesn't get to his raw power as consistently as scouts would like, and he's an average runner who doesn't walk or steal enough bases to be a leadoff hitter. His bat control and bat speed help him catch up to good velocity. He remains a special defender in center fielder with premium anticipation, instincts and ball-hawking ability, as well as a strong, accurate arm. A grinder with great makeup who is regarded as an excellent teammate, Almora came on strong after his Team USA stint, hitting .302 after his return. He profiles as an everyday center fielder in the Aaron Rowand mold, and with Dexter Fowler a free agent, center field is actually a lineup spot that may be available in Chicago in the short-term.

He may figure to be the Cubs CF of the future, but I have a hard time believing that Dexter Fowler would re-sign with the Cubs without assurances they'd leave him in CF. After all, Fowler is trying to increase his value as a free agent and moving to LF is not going to help. Fowler also wants to win so I guess it won't be terribly surprising, but my bet is that Almora learns the ropes in MLB as a left fielder and that's just fine. Starling Marte is the Pirates LF and he is the better fielder between he and Andrew McCutchen. Left field is a bit different at PNC park, but putting Almora in LF is a good way to acclimate him to MLB.

MLB.com ranked Almora 5th in the Cubs organization and 80th overall. Here's what they have to say about Almora:

Almora had the reputation of being one of the most advanced high school position players in recent years, having played for six U.S. national teams before signing for $3.9 million as the sixth overall pick in the 2012 Draft. He hasn't progressed as fast as hoped in pro ball, however, battling injuries in 2013 and struggling in 2014 before posting a steady if unspectacular season in Double-A last summer. He played on the silver medal-winning U.S. Pan American Games team in July, his record seventh appearance with Team USA.

Almora's defense has been as good as advertised. Though he has just average speed, his keen instincts, quick jumps and precise routes allow him to track down most balls in center field. He also has a strong, accurate arm that keeps baserunners in check.

At the plate, Almora excels at making contact but has yet to demonstrate that he can contribute much beyond hitting for average. He has yet to tap into his average raw power, rarely walks and won't steal many bases. His ceiling is probably a .280 hitter with 15 homers per year, and he'll have to develop more patience to reach it.

The inability to do much beyond hitting for average is what scares me. Almora really has an issue with taking walks. He's walking in only 3.1% of his plate appearances this season. He only struckout in 12.8% of them so he's going to put the ball in play. I had hoped last year's 7.1% walk rate was the start of something for him, but it doesn't appear it was. Below are his walk rates in the minors with plate appearances.

Despite hitting very well this season in AAA, Steamer is still not overly impressed with his offensive skills. Steamer is projecting Almora to hit .260/.290/.378 with a .290 wOBA and an 80 wRC+. It's projecting a 3.8% walk rate and a 14.6% strikeout rate. If Almora has a higher BABIP, those numbers will be higher. Steamer is projecting a roughly league average .289 BABIP, but I think it's reasonable to think that Almora might be able to beat that. He didn't in his last two stops in the minor leagues before AAA, but I'm an optimist.