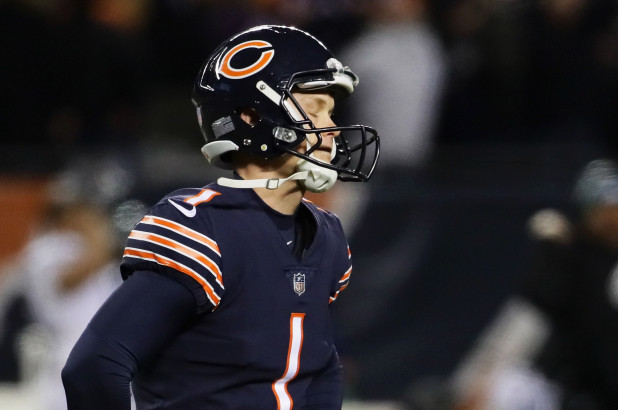 With less than a minute to go in a playoff game, Cody Parkey trotted out to attempt a game-winning field goal for the Chicago Bears. He made the first kick, which did not count because he was iced.

The second was tipped, and then it hit the upright.

The result of that kick is that the Bears lost the game. Their season is now over, and we as fans are tasked with apportioning blame. Who deserves it? It’s hard to apportion blame to the defense, which allowed only 15 points. You should win most games in which you task your offense with merely scoring 16 points. It’s easy to give some blame to Matt Nagy, for playcalling that neglected Tarik Cohen and Allen Robinson for whatever reason. You can even give some blame to Mitch Trubisky, for leading an offense that needed a last-second FG to win the game.

That said, most of the blame MUST go on Cody Parkey.

The (in Mort voice) placekicker in the National Football League (end Mort voice) has basically two roles. The first is to get touchbacks. The second is to kick the ball through the uprights. Every coach knows that, every kicker knows that, every fan knows that. The kickers who do these things are successes, and the kickers who don’t are failures. These are the only things that kickers are measured by. Additionally, those kicks are most important when the game is on the line – kicking a field goal when you are up 30 is irrelevant, and kicking a field goal when down 2 is maximally important. The field goal attempt was a maximally failure – this isn’t that hard.

If you were to go on twitter, you’d find a bunch of extremely shitty people calling for Cody Parkey to die, or worse. These people are the smegma of society, and can be safely ignored. That said, a sizable contigent of people on twitter seemed to try their absolute best to absolve Cody Parkey of blame.

It was not Cody Parkey’s fault the Bears lost. They had plenty of other opportunities to win that would have kept them from being in a position that caused them to depend on a kicker that had proven to be less than dependable this season. They didn’t. They paid for it.

This is a bad take. You shouldn’t share it. It’s not only factually incorrect (the worst kind of incorrect), it’s also an insult to Cody Parkey. If you absolve Cody Parkey of blame, you are either saying that his job is completely irrelevant (when it is in fact extremely relevant) or that he is so unbelievably incompetent that relying on him is a mistake (and I shouldn’t have to tell you why that’s an insult). I guarantee you if you asked Cody Parkey if it’s his fault the Bears lost, he would say yes (and he would be, in fact, correct). It would be like saying that a plumber who couldn’t unclog a toilet wasn’t at fault for the toilet overflowing because he didn’t drop the deuce that clogged it. To say that it isn’t his fault is to be afraid of failure. That’s not healthy. People can fail and still be good people (in fact, 100% of good people have failed before – it may even be a necessary component of being good). Cody Parkey is no worse a person than he was before he missed that kick, because football is a game that people watch for entertainment and it has no bearing on the greater world (and I can guarantee you that he wanted to make that kick more than anyone else did). We can be honest about that, be mad at “Cody Parkey” for him missing a kick, and live our lives. We don’t have to defend his honor online, just like we don’t have to call for his blood.

Life is a collection of experiences – many of them failures, many of them successes, many of them jubilant, many of them morose. That’s the deal. The thing about pretending that the failures didn’t happen is that you’re only pretending. You can learn from them, you can (eventually) forget them, but you can’t rewrite them. Trying to do so is probably a failure in itself.

Also, the Cubs aren’t signing anybody else this year. Buy your tickets to the 2019 Cubs Convention now!