Pedro Strop was part of the trade that sent Scott Feldman over to the Orioles. While the "big prize" in that trade was considered to be Jake Arrieta, there's a great chance that Strop is going to provide more value going forward. He had a rought beginning to 2013 before he was traded to the Cubs. What's Strop likely to be? 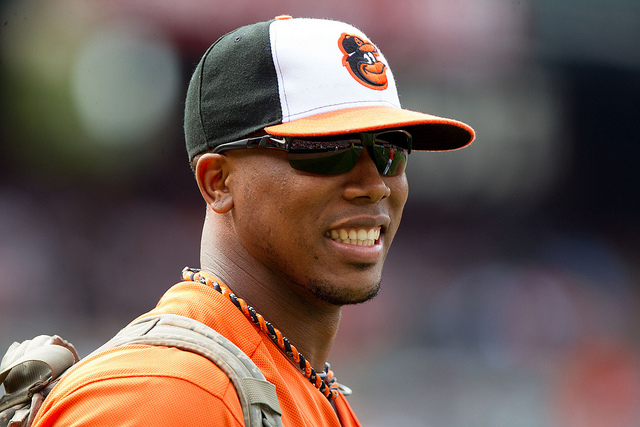 Strop has 2 pitches, with a 13 mph difference or so between them. He throws a fastball around 60% of the time, and it's fast. In 2013, his average velocity is 95.6 this season, and that's typical of Strop throughout his career. His success with the fastball came in 2012, when he finally started to get some run on it (it was very straight early on), but it's a flat fastball which leaves him prone to more than his fair share of line drives. He throws a slider 30% of the time, and it's really pretty effective as a change-of-pace pitch. It goes around 82 mph and has started to run in on lefties fairly well. Unfortunately, it's a Marmol-variety of slider that doesn't spend much time actually in the strike zone. He baits batters fairly well, and they aren't going to make contact, but he's got the chance to walk 3 straight batters every time he comes out. The other 10% are a split between a different fastball and a changeup which he rarely throws. His changeup is terrible and has been for years.

The lack of a true 3rd pitch means that Strop only has value as a reliever, maybe as a closer or fireman potentially. He's 28, so he's not old or young, but the Cubs have team control until 2018, when he'll be 33. Strop's ceiling is as a closer (that probably walks too many to be dominant), but when his fastball loses a few miles or if his control slips even further he'll be out of baseball. I think he's got a chance a to be a cheap 7th inning or setup man as the most likely scenario, and that's a fine return for Scott Feldman all on it's own (a guy anyone could have signed for a reasonable amount this offseason). Perhaps it's not the sexiest get for a pitcher at the trade deadline, but Cubs fans should definitely remember the pain of a poor bullpen.