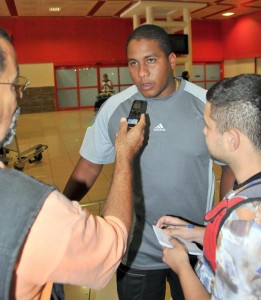 In the past week, there have been rumblings about Cuban outfielder Alfredo Despaigne possibly playing in the United States. None of it makes much sense.

Despaigne is one of the best players in Cuba. He’s a short outfielder with an extremely quick bat, a corner outfielder who could probably play regularly in majors. Last year, Despaigne started playing in Mexico as part of a new Cuban policy to allow players to get paid to play in foreign leagues in the offseason. He has continued there this season.

Last Wednesday, Ben Badler broke the news that Despaigne has been playing on a Dominican passport since arriving in Mexico. The Mexican League is affiliated with Major League Baseball, and MLB is prohibited from doing business with Cuban citizens, so the use of foreign paperwork makes sense. Badler noted that possession of a Dominican passport would make it easier for Despaigne to gain approval to play in the majors should he so desire. While that is true, it’s not particularly relevant. Defectors with established representation have a knack for establishing residency in a foreign country one way or another.

On Thursday, Enrique Rojas reported that Despaigne has used three different Dominican passports, all of them fraudulent, in his time in Mexico. Badler followed that up by examining the implications for Despaigne should he desire to play in the Majors. It’s very interesting, and a suspension could prevent Despaigne from joining MLB.

What’s missing from these articles and surrounding discussion, though, is whether Despaigne wants to play in the majors. It’s easy for us as baseball fans to see a great Cuban player and assume his defection is a foregone conclusion, but that’s not necessarily the case. Until recently, Cuban pundits would frequently boast that the best Cuban players have always been in Cuba. Prior to the recent defections of players like Aroldis Chapman, Yoenis Cespedes, Jose Abreu, Yasiel Puig, and Erisbel Arruebarruena, that sentiment was justified. And while top-end talent does seem to be making it’s way to the states more frequently now, it’s hardly inevitable for top players. Personally, I tend to dismiss the Peter Bjaarkman’s of the world when they rant about the patriotic fervor and loyalty of true Cuban ballplayers (Special Periods tend to thin the ranks of zealots), but there are real stakes for players choosing to leave. They must abandon family and friends without assurance of ever reuniting.

In the case of Despaigne, we know that the government considered him a small risk for defection; otherwise he wouldn’t have been allowed to play in Mexico at all. Moreover, Despaigne played out the 2013 season in Mexico and returned to Cuba. Given that his contract is season-to-season, he could have simply declined to return to Cuba last year and contacted an agent. And the latest news is that Despaigne has returned to Cuba to await judgment from the Mexican League, hardly the actions of someone exploring their MLB options. All of this is to say that there is no evidence at this point that Despaigne wants to play in the Majors. None of the Cuban sites are reporting anything of the sort, and they are often among the first to speculate in these matters. I wouldn’t be surprised if he does leave. There are piles of money at stake, after all. Despaigne’s intentions are far and away the most important factor, though, and we’ve yet to hear anything regarding them.