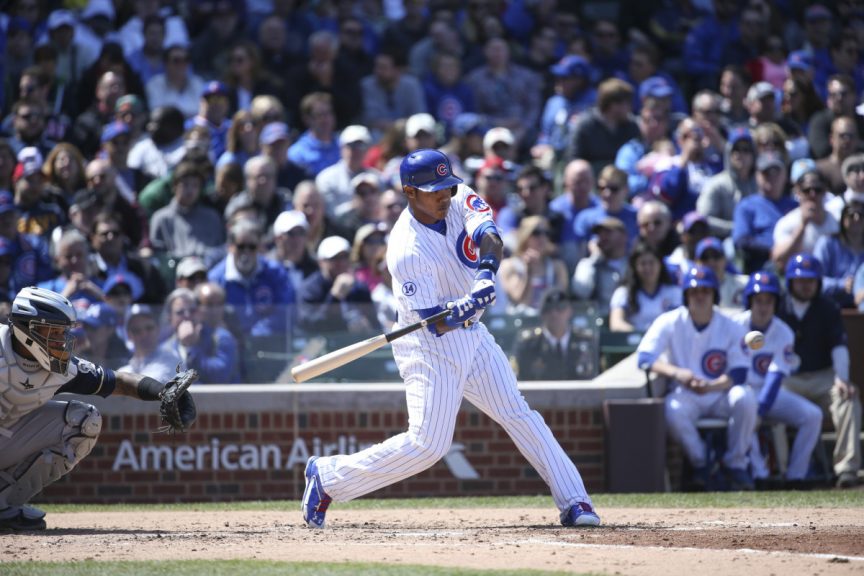 Starting pitching woes aside, this year has been extremely fun for Cubs fans. Something interesting – sort the Cubs in descending order of plate appearances on the year, and you have to get to the 11th player on the list (Tommy the Stella, 83) before you find one that is not above the league average in wRC+. Put another way, the Cubs (when at full health) will always have at least a league-average bat coming off the bench in a baseball game. At pretty much the exact half-way mark of the season, the Cubs already have 6 starters at 2 fWAR.

The 6th in that list is a shortstop by the name of Addison Russell, who is doing his best to erase the bad taste 2017 left in everybody’s mouth. First things first – I’m always going to have his personal issues in my head when thinking about Addison, which doesn’t allow me to see completely straight. That said, I obviously don’t have all the information, and I’m probably never going to have more information that I do now, so it’s not fruitful to think about it. Instead, let’s focus on the abysmal year Russell had at the plate in 2017. Russell dealt with injury, and those 50 games he missed manifested themselves in the 110 games he did play. He walked less (by 1.7%), he struckout more (by 1.0%), and he ended the season with a lower wOBA than even Jason Heyward (who has been another revelation this season).

In 2018, Addison has changed his hit profile completely. Prior to this season, Russell pulled around 42% of his batted balls, with around 40% of all balls in play being grounders. This year, he’s using the middle of the field a lot more (up 10% over last year), and he’s getting some more elevation on his bat (27% LD from 21% in his career up to 2018). Also, his plate appearances look the best that they ever have as a Cub. Russell is walking nearly 10% of the time, and his strikeouts are around 20%. Russell hasn’t had the power that he’s had before, so you worry that perhaps he’s giving up some power for contact. If that’s the case, though, it’s a tradeoff that has paid off. Russell currently has 38 points on the league average for on-base percentage – he’s never been able to do that over a whole year in his career.

If you look at baseball savant, you can see the uptick in plate discipline that has led to this outcome. Russell is swinging less in general, but he’s chasing at career-low rates. He’s also missing at less pitches (due to making contact with more pitches in the zone). Most encouragingly, he’s been swinging at “meatballs”, which implies at least weakly that he’s not just guessing at the plate (or that he’s guessing right).

Lastly, Russell has been avoiding getting killed on offspeed stuff. In 2017, All you had to do to get Russell out was get to 2 strikes and throw offspeed in the ZIP of the plate. He loved swinging and also rarely made contact. That hasn’t been the case this year – he’s shored that hole in his game for the most part. In fact, while last year Russell was basically the same hitter against power, finesse, or average pitchers, Russell has tuned up finesse pitchers this year.

It’s too early to say definitely that Russell is now a better-than-average hitter. There are promising signs, but they aren’t universally positive. His exit velocity is down this year. His statcast data implies that he’s been lucky this year. It’s also too early in the year to say with great certainty that his chase rate and contact rate is absolutely stable. That said, he passes the eye test, and there are many pieces of evidence that he passes the stats test also. Russell was always brought his glove to the stadium, and this year he’s brought the bat as well. The ship on Russell, MVP candidate has probably long sailed (if it ever existed in the first place), but championship teams absolutely require cost-controlled 3-win players, and Russell is on pace to be that this year and more.